On Tuesday we returned to Cowichan Bay to meet up with friend Rick Fletcher as he was doing a scooter tour of southern Vancouver Island.

We radioed the Wharfinger at Fisherman's Wharf and their available space was perfectly situated.  We finished setting our lines and turned off the engine.  And I hear a shout 'KRISTI!'  They can't mean me; who would be calling me?  I was sure that our friends Bob and Marilyn were not on their boat.  I thought Bob was away on a job.  But I look over and they are both  there!

They were JUST ready to leave their slip when they saw us coming in, so they waited and came over for a quick chat.  I learned my lesson.  ALWAYS check ahead.  Turns out, since they were leaving, we could have used their slip for the night.  Oh well.  Rick would be looking for us on the wharf.

Bob and Marilyn have many RV friends, and some were coming from Florida!  They had gotten word that the friends had made it to Helena Montana, so it looked like they were actually going to make it (there were previous attempts to visit, that fell through).  So Grey Hawk was leaving to go to Port Angeles to meet their friends and take them on a boat tour of parts of Puget Sound.  Safe travels, all!

After Bob and Marilyn returned to their boat and sailed away, we cleared a bunk in the v-berth -- Al calls it the 'horizontal storage unit' -- for Rick to spend the night.  Rick arrived in his riding gear, topped with a bright yellow safety vest.  Al saw him ashore and went to meet him.

Rick brought a very welcome bottle of Columbia Crest wine!  Cheese and crackers, French bread and butter, wine and conversation start off the visit.  Salad and chicken tikki marsala are consumed, and the boys go to the back deck to enjoy the sunset, scotch and Cuban cigars.

I am doing the dishes and looking over the bay when I see this eagle fly in to enjoy the view also.  I call him the Captain. 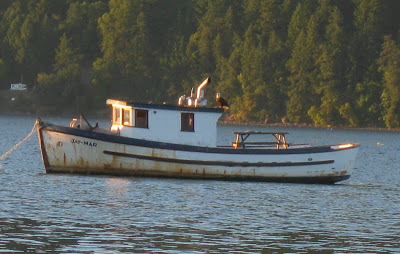 I finish up the dishes and head out to make sure the boys have seen the eagle and to join in their conversation for a while, staying UPwind, even though these good cigars are not as offensive as most. 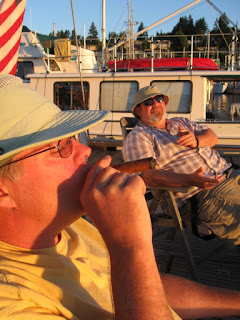 Rick was the skipper for three charter sailing trips we have taken with him, the first introducing us to the San Juan Islands, and the last the Canadian Gulf Islands.  We and he and his wife Christie have boated together on numerous occasions, aboard Viking Star for Christmas Ships, and cruising the Columbia River on their small sailboat.

Yesterday morning Rick left to continue his scooter trip and we went to the chandlery and the bakery.  We left Cow Bay around noon, and went to Sidney Spit to hang out for a day or two more in Canada.  Once we arrived there, we double checked the weather report and found high winds were forecast for Haro Strait, and we would not be very protected at the spit.  So we pulled anchor and moved to the cove on the east side of Sidney Island where the locals have a dock and dropped anchor among a huge colony of Canadian Geese who calmly swim back and forth along the shore.  We roll a bit from the ferry and freighters passing on the Strait, but it is not bad.  Al checks the buoy reports for Haro Strait and the Strait of Juan de Fuca, and they show winds from 20-30, as predicted.

I vote for just staying here, using our last lime to marinate some chicken for dinner, and use up the last of our 'garden vegetables' before crossing back into the USA, probably tomorrow.
Posted by Viking Star at 10:41 AM