“The comfortable and beautiful boats designed by Ed Monk have been treasured for cruising, working and living aboard since the 1920s. Thousands of his fish-boats, sailboats, runabouts, tugs and power yachts have been built, mostly on the Pacific coast, and often by well-known builders such as McQueen, Philbrook, Grandy, Wakefield and Tollefson. Monk's books, his many popular articles in maritime magazines, and the reminiscences of those who worked with him highlight his practical philosophy of design. His boats were intended to handle the often rough and dangerous waters between California and Alaska, as well as the open ocean, in ease and safety.”

“Ed Monk was a modest, generous and talented man, much loved and esteemed by his clients, family and friends, and appreciated to this day by the owners of his sturdy and handsome boats.”

And so goes the fly-leaf in the book: “ED MONK and the Tradition of Classic Boats” by Bet Oliver.


George Edwin William Monk (a.k.a. Ed Monk, Sr.) (1-Jan-1894 to 21-Jan-1973) was a shipwright and naval architect in the Pacific Northwest of the United States. He was active from 1914 to 1973. He designed pleasure and commercial vessels, both power and sail.  Much of what we see in the way of small power boat designs (at least those that still retain a focus on Seaworthiness and Efficiency) can be attributed back to Mr. Monk, along with William Garden another very influential naval architect in the PNW during those days. 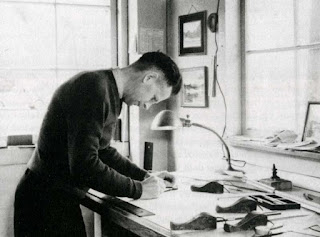 He was by all accounts one of the most modest men in the business; he also took great interest in the boats he designed and it was not unheard of small builders (or even home builds) ringing him up with questions and getting a complete answer, or even at times a surprise drop-by from Mr. Monk himself.  It was during this time that Ed Monk Sr. and George McQueen shared a long history together of producing a number of boats that became known as ‘Monk/McQueens’.  To this day it is possible to see a glimmer in someone's eye when we pass on that Viking Star is a Monk/McQueen, but it is also true that this legacy is fading.


We have owned Viking Star for almost 13 years now, and in those past 13 years I have watched as several ‘remembrances’ of Ed Monk Sr. fade into time.   A Boater's Club http://www.edmonkwoodenboatclub.org/ has been all but inactive the past 5 years.  Occasionally there will be a flurry of ‘We need to get something going’ on the Emailing list (which is still in place), but that soon dies down.  McQueen Boatworks, like many small yards, had been struggling for years – and it too seemed to be fading.  Last week while in the greater Vancouver area I confirmed this to be true – the property where McQueen Boatworks was located is up for lease:

But there was one glowing tribute to the combination of Ed Monk Sr. and George McQueen in Vancouver.  Highly visible, and right on the waterfront:  Monk’s - McQueen Restaurant.   With its big red Monk’s sign lighting up the False Creek Harbor night.   Though I am sure very few of the patrons understood the origin of the name, still I was looking forward to eating at the deck of Monk’s, overlooking Viking Star.   Sadly, that too is no longer.   Monk’s - McQueen restaurant closed last New Year, and is scheduled to be replaced with an Irish Pub.  Now, not that I have anything against a good Irish Pub (in fact, I kind of like them), but it is noticed that remembrances of Ed Monk, Sr.’s legacy are fading. . .