I think I read somewhere that once you pass through 'the rapids', you have left Desolation Sound. We took the route through Surge Narrows, our destination was the Octopus Islands.

A couple of people had told us this area was one of their favorite places. We ran into one of them on the dock at Heriot Bay, and they told us that's where they were going to hang out for a few days before heading up Johnstone Strait. Yup, we spotted them in Waiatt Bay when we entered. But that's a BIG bay. We were looking for something a little more cozy. There were already two boats (one that passed through the narrows ahead of us) swinging on anchors in the more western cove in Octopus Island Marine Park. There was only one in the inside cove, a little bit tighter fit there, so a stern tie is more polite.

After a day of rest, we took the dinghy down for a ride. We were told not to miss visiting the settler's cabin, so that was our first stop. 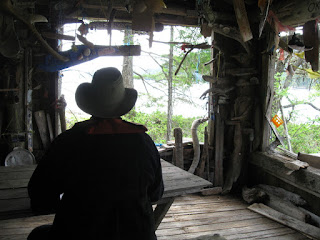 In all, we were anchored in our spot for 10 days. We had intended to stay only 3 or 4 days, but we were still debating what our next destination would be, and then some winds came up so we just stayed put. We were trying to figure out a way we could go up Bute Inlet, but tides and weather were not going to make it easy. We decided to leave it for another year.

Another day, and a LONG dinghy ride to the head of Waiatt Bay, and we took a little hike to... 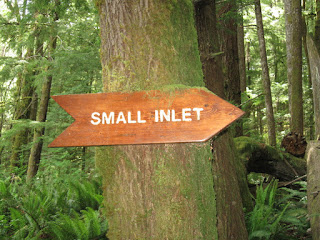 We are always glad to see our dinghy where we left it. We had carried it WELL up the beach, mostly because there wasn't anything to tie it to, and we knew the tide would rise while we were gone. It was  almost floating when we got back. We could stand near the water line and WATCH the tide come in.  Al said we could have just got in and waited 10 minutes and we would have been floating.