This morning we accomplished what we came to Reid Harbor to do....pump out the holding tank.  There is a 'barge' with no electricity to run pumps, so they are done with 'womanpower' this morning.

I tended lines, and then ran the pump by moving a bar to the left and right.  It was quite a powerful pump, because it got the job done faster than I imagined, but it was quite a workout!  Al handled the most important part of the job--making sure the hose stayed attached and didn't splash!

Then we moved out from Stuart Island and towards Roche Harbor.  We had planned to go down Mosquito Pass to Garrison and Westcott Bays, but it looked calm so we decided that we would go out into Haro Strait and down San Juan Island a bit, coming UP Mosquito Pass instead.  However, the further we went the windier it got and the swells were growing.

At a point, Al said, 'Well, what do you think?  We can keep going, or we can turn right now to Roche Harbor.'  I admitted that I was feeling a bit anxious.  I blamed it on the coffee, but I was also remembering the last time I had been on Haro Strait, and it wasn't particularly a fond memory.  Al said 'Well, I think we were in the mindset for a Sunday Drive, but this isn't going to be a Sunday Drive, is it?'  So we turned and went into Roche Harbor.

We were very disappointed that we were able to receive a T-Mobile signal ONLY when pretty much in line of sight of the resort.  We will have to return to Roche on Tuesday afternoon so that Al can complete his work calls on Wednesday and Thursday.

Oh well, another chance for Cheeseburgers in Paradise.

We moved on to Garrison/Westcott Bays, site of the English Camp during the famous Pig War.  Tomorrow we will go to the site and explore.  It looks like there are only a few buildings and a flag. 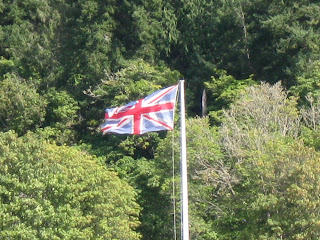 Highlight of the day was meeting Clark on his sailboat Itchy Feet.  He had solar panels, and Al has been conducting his own personal survey, so he hollared out as Itchy Feet passed by 'I'd like to chat about your solar panels!'  And Clark hollered back, 'Stop on by!'
So we did!  Clark reminded me of Santa Claus with his round glasses and white beard.  He offered us coffee and biscuits he had just baked, with butter and jam!  He told us all about Rosario resort, where he winters over on board Itchy Feet.  He used to drive a whale-watching boat out of Rosario, and also spent 20 years in the Navy, ending with Vietnam.  We enjoyed his company so much that we invited him to dinner.
All of us completed some chores, he to scrub his dinghy and we to hang the overheads Al made in the aft cabin.  Then we had a fine meal and more conversation together, along with more biscuits (this time with blueberries baked in)!  Sometimes we really miss an oven.  AND breads.
Posted by Viking Star at 10:38 PM