Okay, this first picture is actually Blind Bay on Shaw Island.  We had to take a break from dinner with friends Rob and Becky from Maxine (on their way back from a trip to the Broughton Islands) to take photos of this gorgeous sunset!  Wow! 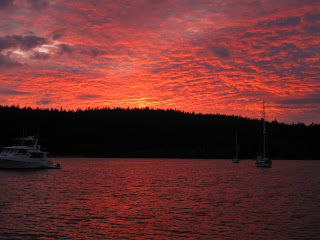 Yesterday we traveled to East Sound on Orcas Island.  We were anxious to have a look at Rosario, but since the wind and weather was favorable, we peeked at it on the way by and headed all the way up to Eastsound, the town at the head of the sound.  We set anchor, waited to make sure it held, then took the dinghy to the county dock, and did a little exploring and grocery shopping.
This morning, this is the view Al had of the sunrise. Wow too!  He let me sleep in, then made coffee. 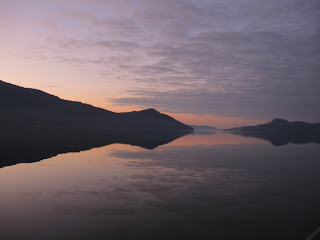 Today we left the boat without breakfast, which turned out to be a mistake, on two counts.  First, because none of the cafes or coffee shops were open (well, one fancy one was, and we weren't feeling fancy).  So we went to the bank to trade big bills for small ones, and then we only had time for coffee before catching the shuttle bus.  That was the second count--we had EXTRA coffee on empty stomachs.
We rode to Rosario and got out to have a look around.  The harbormaster had the day off, so I guess we will have to chat with him another time.  Hey, this is a cool story--double click on the photo to make it bigger for reading... 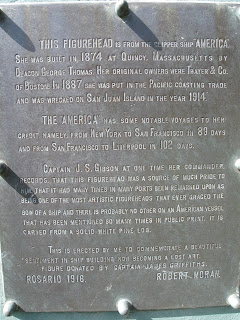 By this time, the caffeine had really kicked in and we were desperate for food!  I got pizza, and Al got fish and chips at the Cascade Grill and Store.  Unfortunately for me, I think the exceptions to the diet for the past day and a half caught up to me, and I got a big stomach ache!  I just wanted to sit in the shade.  Actually I wanted to lay down, but.....

After resting, I felt well enough to catch the shuttle.  We planned to go to Orcas Landing to see it from land, after watching the ferries going by Blind Bay.  There was a cute gift shop that has more espresso---we passed.  We went to the store for some Tums and milk.  After another hour sitting in the shade, I began to feel better.

The return shuttle took us through Deer Harbor and Westsound and back to Eastsound, where we were happy to see Viking Star waiting just where we left her!  Tomorrow we are going to change our plans, and instead of heading to Cypress Island will go back to Blind Bay to catch up with Marti and Walt on Brigadoon as THEY are heading back from Canada.

And Al will have one more chance to set the crab traps before we take a land trip to Portland/Hillsboro for the weekend!