We are sure enjoying James Island.  We have decided to stay for a third night.

Our first morning we were up with the birds!  There was drama between the ravens and an eagle, very noisy! 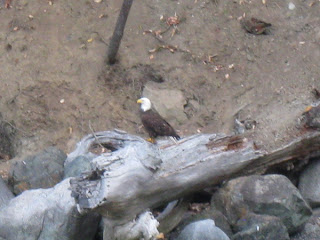 Yesterday we stayed pretty close to the boat throughout the day.  Al emptied the lazerette to get to the rudder post that has been leaking.  He fabricated a tool and got things tightened down and hopefully the boat will be able to dry out well now, and the noisy bilge pump will not have to run.  I scrubbed the outside of the grill, but need to think of a more heavy-duty way to work on the inside of it.  Any suggestions?
Last evening John and Penny from Mischief invited us over for dinner in appreciation of us allowing them to raft off Viking Star.  John said he has been boating since 1986, and this was his first time ever to raft!  They are from the south Puget Sound and it was good to pick their brains about where to go and what to do when we get there.
After dinner there was still about an hour of daylight left, so Al and I decided to explore the other half of James Island.  It is a bit more rugged and we did feel a bit like explorers, following thin wildlife trails and even spotting deer sign.  We believe we found the oldest tree on the island and the highest spot.  I berate myself for not having the camera along!  If the lighting is similar tonight, we may duplicate the hike.
As we returned to the shore, we could see what we first thought were seals in the harbor, but soon realized it was a family of otters.  The were harvesting either kelp or some shellfish and coming to the surface to crunch away!  When they spotted us they got a bit disturbed and hissed and huffed at us, they moved to the side of the harbor, and when they realized we weren't going anywhere, they came back to the dock area and even looked like they were about to climb aboard a neighbor boat.  They rolled and squeeked and were climbing around under the dock even as Al was standing and conversing with the neighbor boat.  I got my camera ready, but they were too quick, and by then it was too dark to capture them.
We had a lazy morning today.  We slept in, then made coffee and brought it back to bed to sip while reading. When we finally emerged, Penny told me there was a baby seal on the beach.  This one was quite a bit bigger than the one we saw at Sucia.  He began to move toward the water, and bawled a few times, sounding like he was calling 'Mom?.......Mom?' before he slipped into the water. 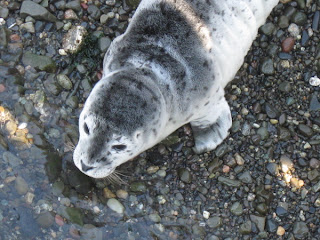 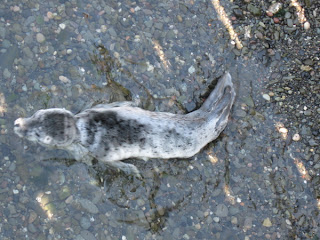 A couple of teenagers had to be cautioned not to touch him and both Al and I wondered at anyone who is from the Northwest could NOT know you are to leave baby seals alone.  Al says he is surprised at how many people we come across who seem so disconnected from nature.  I thought about it.....maybe WE are the unusual ones.  Al's parents used to take him camping when he was small, and he was a Boy Scout, and I am a farmer's daughter.  We have been closely tied to nature for our whole lives.
Posted by Viking Star at 5:09 PM