Arlington.  That's the name of a song by Trace Adkins.  It's really good--if you don't know it, go look it up.

Al and I were both wakeful from 3:30 until 5 this morning, so we were both sleeping soundly when Al's phone rang at 8AM.  It was our buddy boats calling to say they were ready to go!  We had made the assumption that we would be staying at anchor at Miller Island for TWO nights, so it was a surprise to us!  But we got up and were ready to go quite quickly.

Boy, I used the word 'ominous' to describe The Dalles lock, but I don't know a better word for John Day.  Approaching the lock, it looks like a dark tunnel, and the gate is a guillotine, dripping as we pass below.  (It almost reminded me of some of those Disneyland rides!) 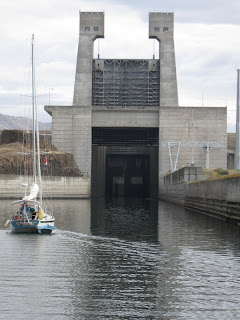 Inside, though, you can see that it is open to the sky.  The gate is ready to drop..... 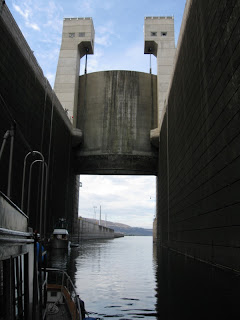 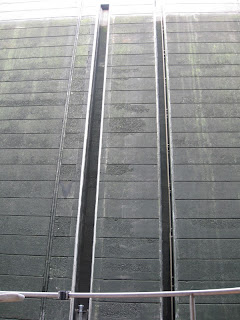 Here is the wall opposite Viking Star--you can see our rail at the bottom of the picture, and the bollard at the bottom of the left track.  We throw two lines over a bollard, one from the bow, one from the stern, and it floats up along with us.  This is one of three of the highest single-lift locks in the Western world, and we will hit all three on this cruise.  We measured these panels--each one is 5 feet, and I count 19 dark ones, and there is at least one below that you can't see.  This lock raises us 113 feet! 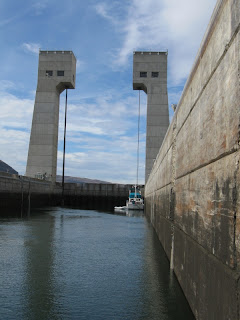 This view is also to the back of us.  See how sunny it is at the top?! 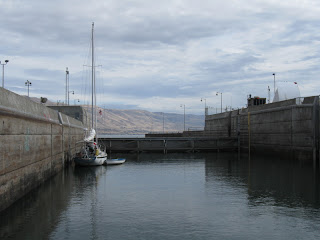 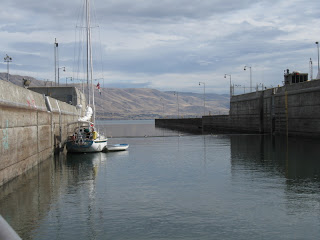 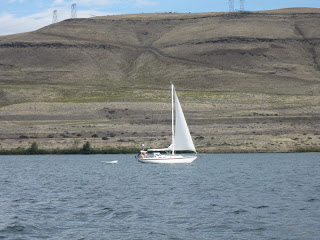 The way from the Dalles Dam to Arlington is not particularly visually stimulating, so Brigadoon decided to create some excitement.  They put up their sails!  However, in this picture, Marti is at the helm while  Walt is tearing apart their raw water pump.  A pully has worn.  They will have to sail the whole way to Arlington! 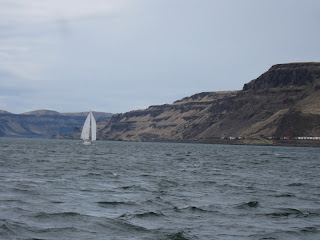 Luckily, the wind came up, as OFTEN happens on the Columbia (see the bigger waves), and they were able to average 5 knots, reaching 7 at one time.  Al took this photo.  He says 'How could it be a better day?  Sails up AND a train!'
We all made it into the marina here in Arlington.  Dinner is being prepared.  The part store will be contacted first thing tomorrow morning, and everyone has some project or other planned.  The wind has died down and the sun is setting on another beautiful day! 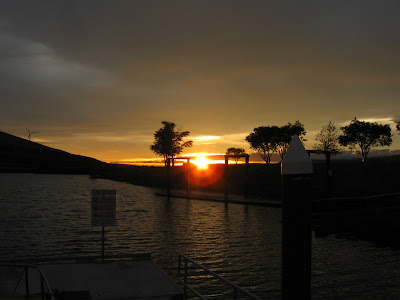