Please be assured that today, things do not seem to be as bad as they appeared yesterday at this time!  (To US -- I know you are just hearing about it now...)

We are okay, the boat is okay.  Al's pride is a little worse for wear and I am stiff and sore from the stress.  And the damage, though a bit more than minor, is less major than we feared.

Now .... the story, and pictures taken AFTER the fact.

The Super Moon has brought spring tides, where the distance between high and low tides is larger and causes currents to rip.  They also have been making the low-low tide a 'minus' tide -- 1 to 3 feet lower than average.  At the old dock in Fossil Bay, Sucia on Friday morning, we came within inches of laying on the bottom.  We moved to the other dock after the tide rose, and had another foot and a half of water there, but we needed to be off the dock before 9 AM yesterday to avoid setting in the mud.

So we had coffee and breakfast and prepared to leave.  As I was putting the dishes away, I announced "I smell a smell."  It was 'chemically' and seemed strongest in the kitchen. We could not determine where it was coming from and soon pulled away from the dock.

As you leave Fossil Bay, you pass between the two rows of mooring buoys, and they were all full.  It feels a bit like those dances where partners line up on the sides and you sashay through the middle.

Al is at the helm and I am standing nearby.  And now it seems I smell gasoline.  Al says that a dinghy just went by, maybe that was it.  Or was one of the other boats running a gas engine?  But as we leave the bay, the smell seems to only be getting stronger, not dissipating in the fresh breeze on the open water.  Al opens the engine compartment and cannot immediately see anything wrong, but WOW -- this is the source of the smell.  It is diesel!  And now Al can see diesel accumulating in the bilge!

He cuts the engine and gets into the compartment.  (We are now drifting in a strong current.)  *Curse* *Curse*  At first he says the engine is covered with fuel and when I turn the fuel pump on and restart the motor as directed, diesel sprays out and he sees that the gasket on the injector pump has pushed out.  So I again shut everything down.

We called Mark on Waterfall, back in Fossil Bay.  They HAD been hoping for a lazy morning before heading back to Bellingham after noon, but they were willing to come out and attempt a rescue.

With the current running and Mark not having much experience working with a side tow, we attempt to throw a long line.  The second pass the boats crunched a bit, breaking a window on Waterfall, bending our rails and pulling up screws.

We can see a Coast Guard ship nearby, and with two failed passes, Al calls the Coast Guard to alert them to what's going on.  Basically, they have about 50 questions to ask, and then pretty much say 'Call us if it gets serious.'  We could call Vessel Assist, but Mark decides to try one more time, and comes up for a side tie, which we DO manage to secure.

I am near tears, and have nearly vomited over the rail.  Lauresa leans across to give me a hug.

Well, now we have TWO boats anchored.  Our windlass REALLY gets a workout, and Al.  He's got the boat pole and beats on the chain to keep it feeding onto the windlass wheel and falling into the chain locker. The anchor is holding tight, and it takes a lot of maneuvering in the fast current before it finally breaks free.

When the anchor arrives back on deck, we are amazed!  It is nearly corkscrewed! 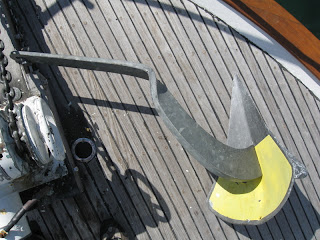 Mark does a good job maneuvering us back to Fossil Bay, despite a power boat that comes way too close, way too fast, to what is obviously two boats tied together.  Then begins the trip back down the corridor of boats.  We are not sashaying this time.  This is the Tow of Shame. (Especially after everyone most likely heard our conversations with the Coast Guard.)

Mark gets us to a mooring buoy and they move back out, on their way home from a quite expensive weekend.

We take a deep breath -- not too smart, since the boat reeks of diesel.  This STINKS, literally and figuratively. We begin to assess the damage and make moves to fix things.  Al sops up four gallons of fuel.  He found his manuals and did online research on the failed gasket and learned that loosening the case and re-positioning the gasket would probably stop the leak.  We started the engine to check, and it did not leak.  He is now ordering a new gasket, and some others that he has learned could/should be replaced. Spade is looking into the cost and timing for a replacement anchor shank, we will use one of our backups until the Spade can be fixed.  Mark will call us when he learns what it will take to have his window fixed and we will take care of that.


I am being nice to myself.  With fibromyalgia, I expect to be very stiff and sore after a stress event, and it began even before we were back in the bay.  Tomorrow should be the worst day for me.  I just hope I don't start losing hair like I did after our storm event last fall (also at Sucia....., hmm).
Posted by Viking Star at 12:17 PM