In my mind, it has become rather expected that significant anniversaries are celebrated by taking a trip, perhaps even a cruise.  But, what do you do when you LIVE on a boat, and every day, you are on a cruise? (And your husband has already taken you to Hawaii, Europe, San Francisco, and more)

Well, when your anniversary falls on the shrimp season opener, and you have new friends that love to go shrimping, you go shrimping!

Another friend asked how one shrimps, and I said 'Like "Deadliest Catch' but with smaller waves.  The day included ripping currents that swept a pot to deeper water, submerging it, but brought it back with the turn of the tide and the most shrimp we got from any other pot, but still was not a good haul.  We had fun getting to know Mark and Lauresa better.  And there was drama, grumbles, and even a couple swear words when the day ended with catching a line on the prop and losing the gear -- the same pot that had played hide and seek earlier.

Here is the day in pictures:


Back at the dock in Fossil Bay, Sucia Island we had a shared dinner of salad, fettuccini, and pork (no shrimp).  Mark and Lauresa insisted we take home the haul.  There are two more weekends of shrimping, and the last one should have better tides.  The day ends with the rising of the Super Moon.  Dr. Kundart, perceptions professor at Pacific College of Optometry tells me that the Moon Illusion doesn't show up in a camera, but this still looks pretty magnificent to me.  I love that wide path on the water... 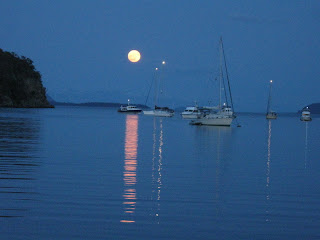