Yesterday seemed just a perfect day.  Clear skies brought out the shorts and tank top, and the deck chair in the sun for me, and in the shade for Al.  It was even warm enough to make me a little sticky!  My legs now have a golden touch, and my face and arms are a little rosy.

Word on the dock was:  Where is the wind they were calling for?!

Mother Nature just delayed a little, and many boats in nearly every bay on Sucia Island were dancing in the wind from 1 to 4 AM.

Viking Star, secure on the dock, was rolling a bit, and the fenders were squeaking, making for a restless night for us.  Only after coffee and a shower did Al wander down the dock and come back with the story of carnage in the anchorage last night.  Several boats had drug anchor, tangled, and/or bumped into each other.  One even snagged a mooring buoy and ended up cutting free their anchor.

After Ranger Steve arrived, we heard MORE stories of similar experiences in Echo Bay and Shallow Bay both, only each of these bays had a boat on the rocks!

I walked over to Fossil Bay near noon to meet Al while he worked on a project.  Here is a small boat, on Wiggins Reef, towards Ewing Cove. 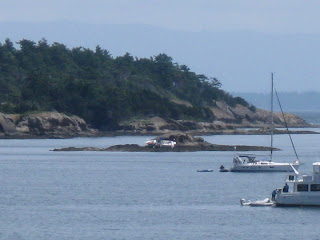 Al was coming back with the truck already, so he turned around to show me his project, AND the BIG boat on the rocks in Shallow Bay.  A very anxious time for an older couple, and a very dramatic photo! 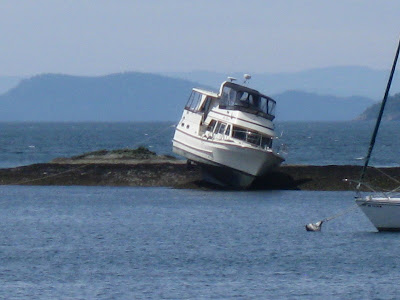