Yesterday we left Sucia  under Cloudy Skies.  It gave me a little opportunity to log our new Solar Panels output under conditions that were not a Sunny May Day.  We had two deviations:  1) Cloudy Skies, and 2) an interaction between the Solar controller and the main motor alternator.

Here is a chart that shows in Blue the average out of our panels over the past three full-sun days, while the Red shows a portion of yesterdays output. 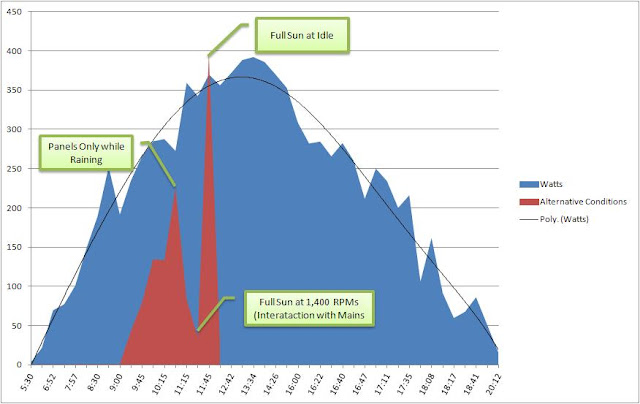 From approx 8:00am to 11:00am I logged the production while under Cloudy Skies (it was raining).  The 11:35 data point is while we were underway with the mains alternator putting 150A into the batteries.   Note the dramatically reduced output from the Solar panels, even though over the next hour the skies fully cleared.  At 12:40 we stopped (idled) while awaiting a tug and tow to pass before us in  a  VTS traffic lane and you can see the Solar output popped up to 396w – Right in line with the average for full sun production.  Then when we got underway again Solar output dropped to 27W (about 2 amps) while the mains alternator was putting 101A into the batteries.

This VERY LIMTED sample set indicates two things to me:
1) Solar output is reduced to about 1/2 while under cloudy (rain) skies.
2) There is an interaction between the controller and the mains alternator – with the Solar controller in effect shutting down when we are underway.