After a week of showing our friend Brian around the San Juan Islands, and moving every day, we are now set to stay in one spot through Memorial Day. 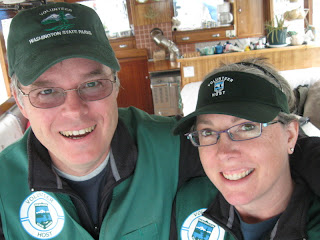 The website says Sucia has hosts, but Ranger Steve has been here for six years, and says he has NOT had hosts....until now.  This is a test, and we hope we pass.

I believe Al is having a ball!  He loves chatting with people, and there has been plenty of opportunity for that today.  The International Yacht Club is here, bringing lots of friendly Canadians.  A large group of Boy Scouts arrived this evening.  Former Scout Al will be showing the boys where to work on their service project tomorrow morning, removing English ivy.  And it is the final weekend of the shrimp season.

Sadly, the afternoon brought tragedy.  A small shrimp boat overturned just off Little Sucia and all three boaters were tossed into the water.  Even though former firemen from our dock took a surgeon out in their fast dinghy to help, and our own Ranger Steve was on scene and helped perform CPR, one man lost his life.  A Coast Guard helicopter and boats were there to help the two survivors.  Other boats were near too.  Our shrimping friends Mark and Lauresa who rescued US two weeks ago recovered some debris and tossed one of their sleeping bags to a hypothermic man.

Our prayers go out to all:  the man who lost his life and his family, the two survivors who lived through this harrowing experience, the first responders who worked so hard but were unable to save one, all those nearby listening on the radio and knowing there was nothing they could do.
Posted by Viking Star at 9:02 PM