We had been looking forward to Poulsbo for a long time!  We had been told we would love it, it is a cute town, the bakery is wonderful, etc., etc.  It was all true!  We spent two lovely days here.  Al enjoyed a walk through the marine store.  We approved of the coffee at Cups Espresso - twice, where the owner told us to go ahead to Sluys Bakery and bring our goodies back to have with our coffee. We had an excellent dinner at Mor Mor, from appetizer to bottle of wine, to salad, entree and dessert -- I have not felt so stuffed in a long time.

I had heard so many pronunciations of this town's name, that I asked the barista what was proper.  'Paul's Bow'  is more correct than the 'Pools Bow' that I had been using.

Sunday morning we pulled anchor, and Al is once again motivated to install a wash-down pump -- sooner rather than later.  At least it is better than the wormy mud of Henderson Inlet, but Al's feet are all wet and his shoulders are aching from the many buckets it takes to rinse the goo from 150 feet of chain. 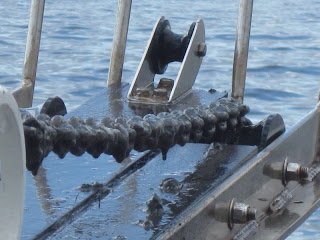 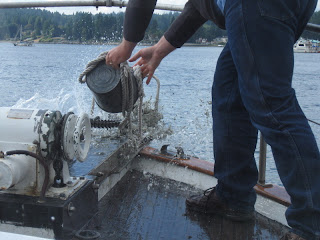 Al had been looking forward to visiting the submarine museum at Keyport.  That was our destination for Sunday, with plan to stop again at Illahee State Park for the night.  However, the guest dock at Keyport was occupied.  We WILL come back again on our way north, late September or early October.

It's only 11:00, so on we go past Illahee.  We usually just like to travel no more than 4 hours when we are on the move, so we had talked about several stops on our way south to Olympia  -- Illahee on Sunday, Blake Island on Monday (expecting turnover), perhaps Gig Harbor, then Eagle Island.  BUT, it was way too early to stop at Illahee, and Al didn't want to be at that dock with the parade of boats going by, and Blake was FULL.

I checked the tides and currents and saw that it would be favorable for us to go through the Tacoma Narrows if we chose to do so.  Al said 'Let's do it!'  I wondered, since we would be passing through near the 'max flood', whether we might exceed 10 knots.  The book said max flood would be a 3.8 knot current, added to our normal cruising speed of about 6 knots.  It would be close, but Al was doubtful....watch our SOG (Speed Over Ground) grow! 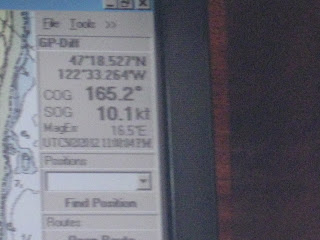 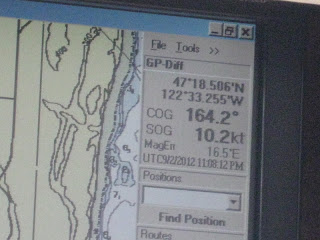 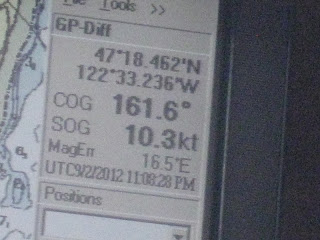 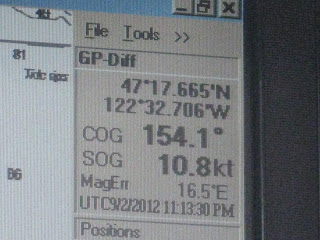 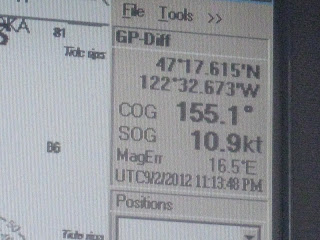 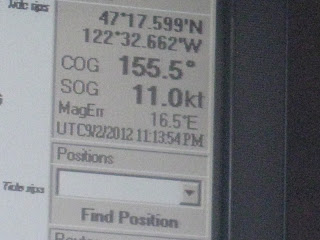 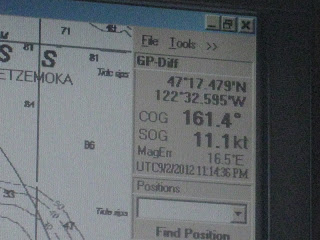 ELEVEN POINT ONE!  (It actually reached 11.2, but dropped too quickly for me to capture a photo).  This is the fastest Viking Star has ever traveled.  We had previously been to 10 knots  with the spring runoff below the Bonneville Dam.  WHEEEEEEEEEeeeeeeeee!

We took a peek at Eagle Island through the binoculars, but the east buoy was taken, so we went on to Oro Bay.  We like it here, and the sunset helped to reinforce this opinion.  Since we covered three days' worth of travel in only one day, we will remain at anchor here for another night, at least. 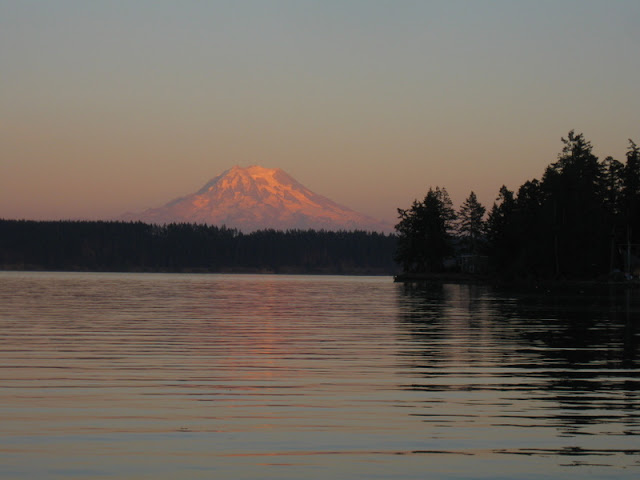