Kristi and I had a wonderful time in Jarrell Cove,  this is a jewel of a spot in the South Sound.  And being able to spend time with Walt and Marti was a great plus!  However it seems we have picked up a stowaway.

Last night I was walking the deck after Kristi heard something.  Turning on the deck lights and walking around with a flashlight I caught a glimpse of movement off the aft corner of the aft cabin roof.  At first I thought it was perhaps a small otter, but after looking around a bit I found more evidence.  Rat droppings.

We had previously noted some chewed paper remnants, and thought they might have been from the yellow-jackets that are oh so prevalent this time of year, but even then I had my doubts.  They really looked like rodent work. And now have confirmation.  We have a rat. 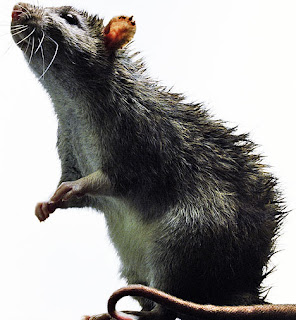 And I even remember seeing this guy on the dock in Jarrell Cove as he ran back and forth late one night before disappearing below the dock.  Now it seems he too likes the mobile life.

But all joking aside, this is a big problem – as rats tend to like to chew things.  Wood, Wire, Hoses.  Not to accomplish anything mind you, but just because they are bored.  And on a boat this is a big issue.  Let them get into the wrong hose and, well – you can get the picture.

So, am hoping this little bugger does not do too much damage until we get into Olympia and get some traps. Which brings up a hint to those fitting out – stash away some traps.  This is a topic I think most folks do not talk about, but to be honest – I wish I had some trips RIGHT NOW.  Who knows what damage that little bastard is doing to Viking Star..  I cannot wait to Float Test him.
Posted by Viking Star at 12:16 PM