That time again, and perhaps a good thing - might be well to get a post up OTHER than travel logs!

April brought us into Canada for the summer (except for a short trip back east planned for in July).  We have been enjoying our time, seeing new places and revisiting old places.  At 1st glance it looks like Canada is a great low-cost place to cruise, but perhaps this months costs summary needs a bit of explanation: 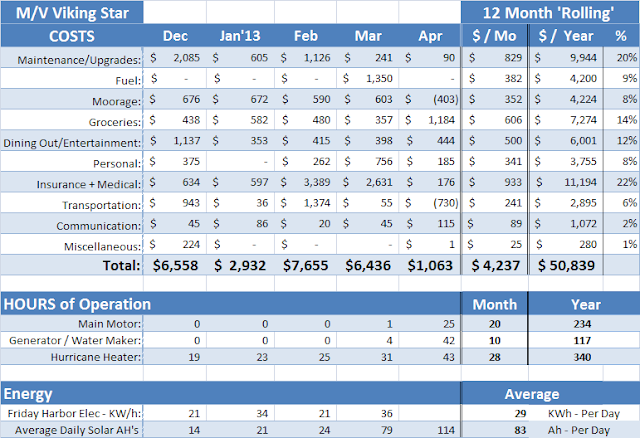 Yes the bottom number is great, but what about those negative numbers for moorage and transportation?  Well, we received our deposit refund from Friday Harbor, and Delta (believe it or not) actually refunded our non-refundable tickets on the trip to nowhere!  Other items of note:


Solar is starting to get on its feet producing an average of 114Ah's / day, again exceeding the  modeled 110Ah/day.   I noticed while dumping this months data on three days the Solar controller went into Float mode.  This means we were not taking all the energy being produced.  Most likely this is because I have been putting more hours on the Generator than we normally might, doing final proofing of the new Arduino based  controller / regulator.

And speaking of Generator..   42Hrs!  WOW.  I know I had been doing a lot of trial runs to proof the new controller, but 42hs is almost 4x our normal run rate...  Given the generator now has full throttle control and will slow down the engine as the battery gets charged (kind of like Honda generators), I do know we have not been in such a rush to turn it off - and have at times just left it humming along quietly.   Combined with the new just-flick-the-switch way to start it - hum .  .  .  will be interesting to see how our usage patterns shape out.