Yesterday was a fine sunny day.....until we stepped outside!  It was a VERY cold wind blowing, so we bundled up for our exploration of the northern part of the island.  Daryl from Tortoise, whose yacht club supplies park hosts for Wallace Island through the summer, told us 'Don't believe everything you see on that sign!'  We had been debating whether we wanted to go all the way to Chiver's Point, which the sign said was 2 1/2 miles.  He said, 'Nah, it's only 1 3/4'.

We took a small detour to look at Princess Cove.  There is private property with a dock on the right, and a park dock on the left. 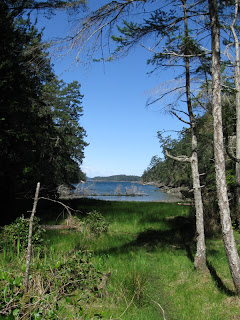 The day before, I noticed that the island had a 'spine'.  This day I decide the island is a sleeping, stony dinosaur, and it's spine extends the whole way, end to end.  It takes awhile -- longer than we expected -- to reach Chiver's Point, but the view is worth it!  The ebb tide is ripping through the small channel between Wallace and the Secretary Islands. 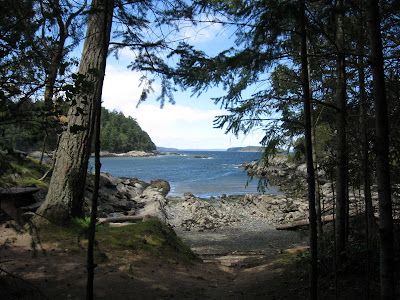 It is VERY cold -- I've said that before, haven't I? -- so we don't sit still for very long!  We make it back to the boat for a late lunch, and low tide.  I'll post the previous night's channel shot side-by-side with a low-tide shot for comparison: 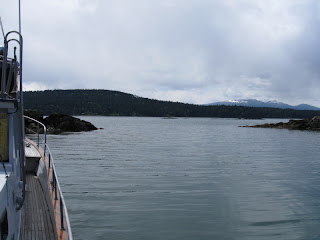 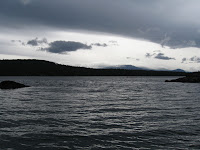 Actually the 'high tide' one wasn't really high tide.  The rock on the left completely disappears at high-high tide, along with a bit more of that tail on the right.  Also disappearing at high tide?  The reef you can see out there in the photo on the right.  Yes, it is on the chart, but many people forget about things they can't SEE.  We do not want to be these people.  (If you can't see the reef, click on the picture to see it bigger.)

It's still pretty windy today, and we are feeling lazy.  So we decided to spend another day here.  Al is lubing the windlass -- it had started sticking when we wanted it to let the anchor go.  Then he's going to cook some oysters for his lunch.  Not sure what I will dig up for myself yet.
Posted by Viking Star at 11:17 AM