On the morning of Saturday April 6, I discovered we had had company on the boat, once again.  Here is the evidence: 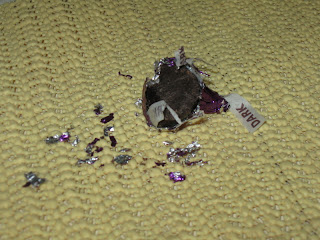 We believe that the intruder boarded Viking Star from the dock in Reid Harbor.  We HOPE that he ate his fill and then stumbled back to HIS home.  We baited and set the rat trap we purchased the last time this happened, but we have seen no further evidence.

We departed Reid Harbor bound for Sidney, BC, crossing the border (we couldn't find the line in the water) just after 1PM.  We pulled up to the customs dock in the Port of Sidney Marina about an hour later.

Clearing customs was very quick and painless.  A few questions were asked and answered, and we received a clearance number to display in our dockside window while in Canada.  And we raised our Canadian courtesy flag. 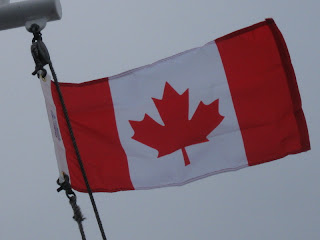 We were very impressed with Sidney!  Everything appears very clean and new.  There were colorful flowers planted everywhere.  A grocery store was only 2 blocks away, and a STARBUCKS 4 blocks away.  There are a few other coffee shops, and numerous bookstores.  There are a couple of banks with easy-access ATM's where we able to get Canadian cash.  (I like the new 50's -- they have a clear plastic window and holograms!)  Al found a hardware store and a marine second-hand store. We found a liquor store and were happy that Jameson is actually cheaper here than in Washington!  The clerk also recommended a Canadian vodka that both Al and I found very acceptable.  However, wine is not available in grocery stores, only at the liquor store, and it is VERY expensive!

We recommend the 3rd Street Cafe to anyone and everyone who has reason to pass through Sidney!  Unusual for us, we were showered and off the boat by around 7:30 AM.  I think we were the first customers in the door, and entire staff was fabulous!  The food was also wonderful -- I can personally recommend the Brie and roasted pear omelet.

We heard another storm was coming, and we are too cheap to stay in the marina any more at this time, so today we decided to round the peninsula into Saanich Inlet, anchoring in Tod Inlet, near to Butchart Gardens!

As we were motoring today, we noticed that the chartplotter indicated we were ON LAND a few times that we were NOT!  This can be quite dangerous when you are relying on the chart to tell you how close you are getting to things you don't want to hit.  Al says, this is why it is important to take Power Squadron classes, so you can learn what datum is, determine what your chart datum is, and to alter your equipment to get an accurate reading.

We will be anchored in Tod Inlet for a few days, floating among the jellies, seals, and Barrow's Goldeneyes.