After a rainy morning, we decided to go to shore and explore Portland Island a bit.  We took the cross-island trail to Princess Bay.  There wasn't a lot of change in elevation, so there was a LOT of standing water!  The trail was quite swampy in places, and there was even a stretch where an elevated boardwalk was installed.  We seemed to be followed by various flying insects -- 'Ahhhhhh, fresh warm blood!' they seemed to whine.

At Princess Bay, a lone kayaker was just arriving.  He is Jeff, from southern California, this summer paddling from Olympia to Alaska.  But he's already had BIG adventures, hiking the Pacific Crest Trail from Canada to Mexico, and he has hiked the east coast from Florida to New England.  Now he's taken to the water!  Good luck, Jeff!

We found the mosquitoes to be QUITE annoying, but as long as we kept moving they seemed to leave us alone.  We took the trail that edges the northern shore of the island back to Royal Cove.  There was a lot more 'up-and-down' on this trail, so that our knees creaked a bit.  We heard a LOUD noise, and had some trouble deciding what it was for sure, but finally believing it was a frog.  There were a few tents on Arbutus Point. 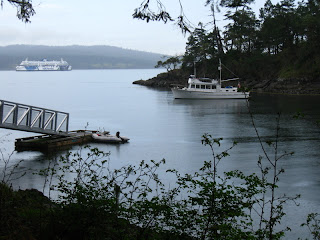 Al had noticed the 'hundreds of oysters' on the shore, did some research online, and got his Canadian fishing license.  So he dropped me off at the boat and took his bucket to shore.  He says I don't need to cook dinner for him as long as we stay here. 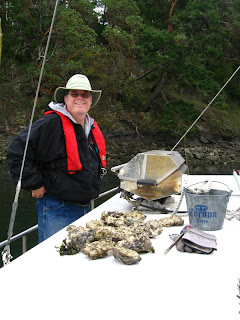 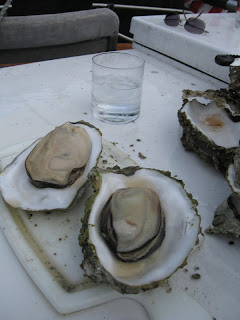