We spent the night in Fulford Harbor -- oops -- spelled Fulford Harbour here in Canada.  There is a small ferry that goes between there and Saanich Peninsula, and since he moves pretty quickly, he CAN throw a pretty mean wake, as we found out when we were overtaken entering the harbor.  But the spot we chose to anchor in was at the end of the harbor, where the ferry had slowed greatly for it's turn to the dock, and the wake was just a gentle roll.

This morning, we had something we wanted to mail, and I hoped for another latte, so we got in the dinghy to go.  Wow.  I think those were the biggest waves we had ever rode with the dinghy.  We ran our errands and poked around in couple of establishments, decided to skip a walk to St. Paul's church because it was starting to rain.

Ooooo, look at the water!  I think the waves got a bit bigger!  But, we are going more 'with' them than the trip in, so it will be okay.  Uh huh.  Rather than sitting on the tube like we usually do, I kneeled down on the floor of the dinghy, keeping the center of gravity as low as possible.  It wasn't too bad, and the trip went faster than I expected.

Once we returned to the boat, the adrenaline (and the caffeine?) kicked in!  I wanted to get some of my transcription work done, but I was afraid that working with my head down on boat tossing on the waves would get the best of me.  I was fully prepared to spend a miserable afternoon and night and even said "I sure do not want to go out there!", but Al insisted on moving out of the SE facing harbor when increasing SE winds were forecast.  And remembering two of those 'It's all been great, except for 3 days' in a similar situation on Sucia, I couldn't protest.

We checked out the possibility of anchoring in the lea of Russell Island and decided it would be a good backup.  Then moved on to Royal Cove on Portland Island. Portland!  Sounds like home!!!  There is even a Hood Island around the corner from Royal Cove.  Royal Cove is rather small, but well protected from all but NE winds.  The forecast says the winds will move to the northwest sometime tomorrow, so we should be okay.

We knew we would have to do it sometime once we began to move north -- stern tie.  We had bought a spool of 3/8" poly line -- it is bright yellow, and floats.  We wanted to keep our orientation in this small cove, and we had no audience for our first attempt.  Everything went very well!  We first set our main anchor and backed toward the shore.  Then Al paddled the dinghy to shore with the line.  THAT'S when I remembered the camera.  So once he was safe on shore, I asked if it was okay for me to get the camera.  It was, and I came back to get him tying where a blue ribbon indicated a ring in a block on shore. 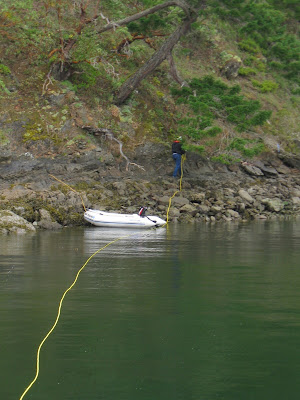 Here's the spool set-up.  It turned SO easily on the broomstick that I didn't worry about it falling off the chairs, but perhaps in future we will have the chairs face the other way.


And here he returns to the boat.  We will take up the slack and tie off to the cleat.  The tide is going out, so we will monitor and loosen it if necessary.

And here, the water is calm.  We hit 28 knots wind-speed on our way over, but since our arrival at Royal Cove our wind gauge has only gone to 8.  Several ferries have passed by, and the wakes have been minimal.  I think we can be happy here for a few days, maybe even through the weekend.  THIS is the kind of place we like most to explore.  All of Portland Island is the Princess Margaret Marine Park, with trails and campsites and a freshwater pump.  We'll let you know how it goes.
Posted by Viking Star at 4:42 PM