After a pleasant morning in Oro Bay, we decided to move on to another location.  We would like to cover all the places we really want to see in the South Sound in the next two weeks.  We are expecting some company soon!

Al was on the bow dealing with the anchor, as usual, but this time I kept the helm (all the way to Penrose State Park!)

I steered the whole way, until I asked Al, "What IS that floating in the water up there?"  He said, "Birds."  Okay.  And a minute later it was "Hold on...that's an OTTER!"  Al called him Oscar, and he was HUGE.  Do you think he was a sea otter? 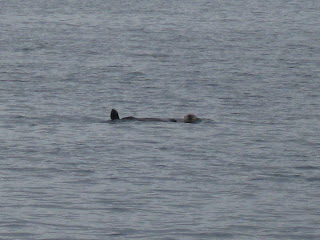 We don't usually like to tow the dinghy, so most of the time it is up on the boat.  But we decided that we would tow it in Carr Inlet to explore a few places.  First stop was Mayo Cove.  We found the state park dock and got out for a hike.


We hike back to the dinghy, and decide to stop at the boat so Al can change his shoes for a walk on the beach on the other side of Penrose Point to look for sand dollars.  On the way around the  point, we gave this guy a wide berth, thinking he may be perching on the spit.  Al says, "We've never seen a Jesus heron before!" 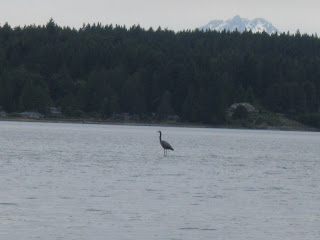 The guidebook said we could find sand dollars, up to 500 in a square yard, on Delano Beach south of the point.  I expected to find a sand beach loaded with them.  It also said they had reddish-brown flesh.  We noticed kind of orangish ones in the water below us. 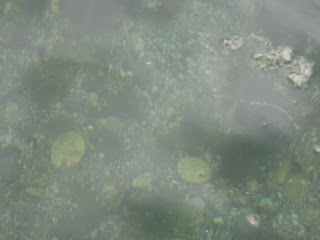 Then we saw FIELDS of these much darker discs seemingly standing on end.  We first thought they were rocks, but Al was able to bring a couple up for a closer look! 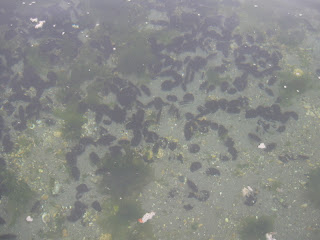 A successful outing!  But it's beginning to rain, so we head back going slowly and close to shore, mapping the sand dollar fields.  But wait, is that a huge fish?  No!  It's a seal, swimming below water, between us and the shore.  He scoots away, and surfaces a moment later, looking at us grumpily.  Sorry!  Then as we approach the Point once again, we discover the heron's secret! 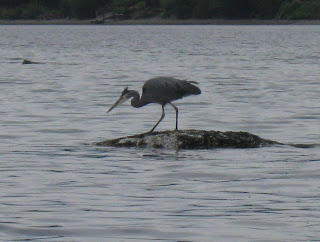