Where Ferries Go to Die??


While in Friday Harbor last winter, Kristi and I enjoyed keeping track of the ferries as they came and went.  They became friends, and we could start to tell them by sight or Sound.  Yes, we know why there is no ‘T’ in Sealth!  So it was interesting to come across two out of service Ferries the other day while motoring around South Sound.  One obviously an old Washington State Ferry and another with what looked like a fringed roof! 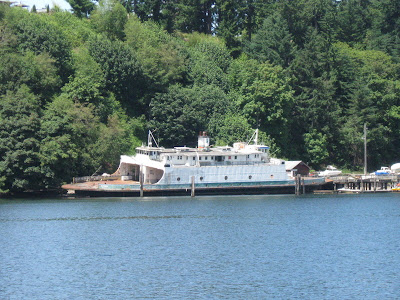 We first spotted Olympic listing on a receding tide on the NE corner of Ketron Island.  Looking sad but not too far gone?  Researching the web (Great site:  www.Evergreenfleet.com) reveals she was one of two ferries purchased from Chesapeake Bay ferry service in 1954.  Both were pressed into a quickly expanding Washington State ferry system while newer ferries were being built (the 1st being one of my favorites ‘Evergreen State’).  The other ferry purchased in 1954 was not a Sistership but more of a Cousin.  And this vessel, the Rhododendron, interesting enough was also heavily involved in the ending point of Olympics’ career.  Read more here: www.evergreenfleet.com/olympic.html

It is interesting to note that the newest class of Washington State Ferries being built are named the Olympic Class (144 car ferry).  I wonder why no mention of m/v Olympic is made in the new ferries web site? : www.wsdot.wa.gov/News/2012/06/19_OlympicClassFerries.htm 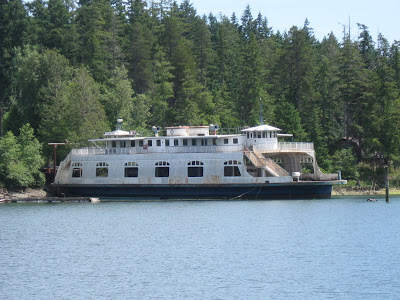 The next ferry we came across was Ocean City nosed into shore in Oro bay.  Again, a vessel with a long history – and an end that involved a dream.  And again, this ferry began her life on the East Coast and was transported to the sound – though this time it was after her retirement from ferry service.  Purchased by Tom Palmer to be converted into an excursion boat specializing as a kind of ‘floating campground’ for RVers while touring the Puget Sound.  What a fun idea!  I found two sites with some history:


All things come to an end.  And it seem the South Sound has its share of ending work horses of the water.  Kristi and I ran across a couple of old wooden tugs, and one other ex-military looking vessel (minelayer?), nosed into shore in someone’s back yard here in Mayo Bay.