We anchored smack dab in the middle of Henderson Inlet.

We entered and motored slowly down center, gawking around.  The shore on the north half was filled with houses.  There is a railroad spur on the west shore, where there are log booms and lots of seals lolling around, below signs that warn not to approach the wildlife.  Access to two creeks that empty here are thus blocked from dinghy exploration.

So we just drop anchor for the evening.  We do see several seals in the water, a few seemingly jumping for joy.  We saw our first loon since leaving the San Juans.

Al and I both worked for an hour this morning, and then prepared to move on.  Poor Al.  As we pulled anchor, the chain was loaded with mud.  He's been saying for some time that he wanted a wash down pump, and this is exactly the reason for it!  We had 150 feet of chain out, and it was rinsed -- bucket by hand-drawn bucket.  Only after the anchor was stowed did he tell me that the boat was covered in worms!  More rinsing ensued to chase them out the scuppers.

We enjoyed just moving slowly around Johnson Point.  Al made a comment that the South Sound seems to be all about houses.  THEN, we see this one: 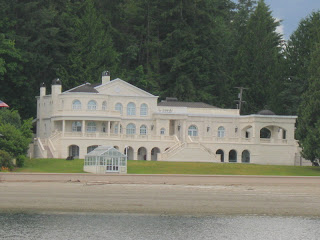 Tonight we float on a mooring buoy at Tolmie State Park.