A Review of Olympia

Last weekend we spent a day driving around a bit in Olympia before we returned the car we rented for our trip to Portland.  We drove up to the Capitol building, where my mother worked in the secretarial pool in the late '40's (?).  We kept the boat at Swantown Marina, and drove past the boatyard there -- scoping out places to haul the boat this fall.  Moorage at Swantown is very reasonable, compared to the summer rates at most marinas in the area of the San Juans.  Plus, this is where Viking Star was hauled out before being put on a truck and brought down to Portland when Al first purchased her!

Last Friday, we returned to Olympia from Hope Island.  The refrigerator was nearly bare, and the shafts Al left at a machinist to be keyed were ready.

This time we enjoyed our stay at Percival Landing!  We had a great view of the Capitol building, and were just blocks from a grocery store , the Farmer's Market, the machine shop, a welder and much more.

Our visit got off to a good start when we went to the Community/Senior Center to use our credit card to pay for moorage.  We ran into a very friendly man in the lobby.  With just a few minutes of conversation, we learned so much about each other.  Roger had one of those sit-down walkers, even though he was only 50.  We suspect he had some sort of mild brain injury.  He is a self-described 'military brat', half Japanese, half Scandinavian.  His father was born in Canby, MN.  Roger moved here from Okinawa 5 years ago.

We picked up the generator parts.  We got lattes at Cafe Vita, and did some window shopping.  We stopped in at one of the MANY bookstores downtown and picked up a copy of River Horse, a book recommended by our friend Hira.

Saturday we went to Batdorf and Bronson for more lattes, and learned the legend of the Dancing Goats (http://en.wikipedia.org/wiki/Kaldi )  A friendly customer outside with her dog recommended we also go to the Tasting Room just another block down the road at the roastery, so we did!  We sampled 4 brews and bought some beans.  Throughout the day, a soaking rain fell.  We walked to the grocery store and came back to fill the fridge.

After dinner, the sun actually came out!  We took a walk along the waterfront at sunset. 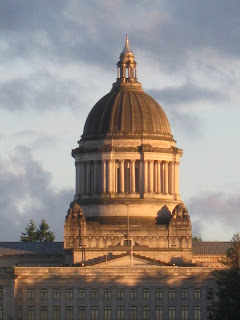 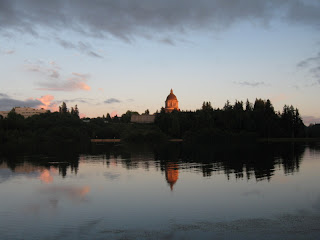 Today we spent the morning at Starbucks, where I got my favored Chai Tea Latte, and also a Clover-brewed coffee.  We filled the water tanks, and motored up to Boston Harbor for ethanol-free gas for the dinghy and the back-up generator, and soft-serve ice cream.  Now we are at anchor just around the corner in Henderson Inlet.

Overall, we found Olympia to be a small town with just enough 'big town' touches for our satisfaction.
Posted by Viking Star at 6:41 PM