We spent a VERY pleasant afternoon in Oro Bay, Anderson Island yesterday.  I did some sunbathing and I think I timed it just right ... what was just turning pink yesterday is browning up nicely.  My own touch of 'Oro'.

Al stayed up late (early?) playing with his computer project..

Soon after I awoke, I was laying in bed, and I heard/felt a thump.  What was that?  It came again!  Did something bump us?  It should be low tide....are we hitting a rock?  And once more a thump.  I look out the window and see that the water is low indeed.  And then I see a seal.  Was he playing with us?  Hmmm.  I did not hear the thump again.

I turn on the computer and check facebook, being quiet to not disturb Sleeping Al.  The coffee grinder would surely disturb him.

I look up, and again I see a seal!  He has a fabulous 'zen' pose going on.  I grab the camera, and when I open the cabin door, he looks over, but holds the pose with his rear flippers peeking out. 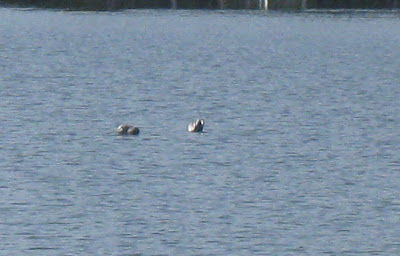 Mostly, he appears to be worshiping the sun, facing it with eyes closed, soaking in the rays...much as I did yesterday afternoon.  He had to have floated in this way for nearly half an hour! 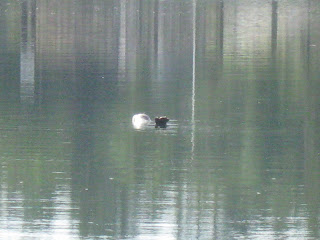 After breakfast and a shower, I was doing dishes, and I heard a terrible sound.  It sounded somewhat like a woman screaming, but it was SO CLOSE, and if it was a person, why was she not using any words?!  I dried my hands and began looking around.  There were no nearby boats.  I didn't see anyone in the water.  Then I spied this fellow on the beach: 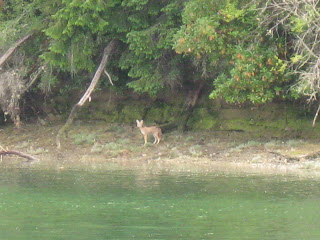 Watching his intended dinner swimming away... 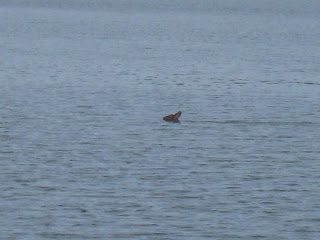 I usually think of deer as silent animals, but I can tell you ....they can scream Bloody Murder when the situation calls for it.  This seemed such a small deer. I watched it worriedly, hoping for it to get to shore, and not be badly injured.  I needed binoculars, but it DID make it.  It had no spots, so it was a youngster and not a baby.  It did not take long for it to make a bounding leap up the shore.

The circle of life was not completed in this instance.