Another month already?   Well, that is maybe okay as this month is turning out to be a pill weather-wise.  Kristi and I just 'weathered out' a massive cold front - with up to Hurricane Force winds over part of BC - Yes, we get such strong winds up here - only we just call them Storms :-)    We picked a great hidey-hole here in Pirate's Cove on De Courcy Island.  Fully protected.  We noted only 26kt peaks at our level but it was wild to see the tops of trees dancing last night all around our nice snug cove.

Cost wise September of this year turned out to be not that bad, especially considering we spend almost 2 weeks IN A CITY!!!   But we managed to restrain ourselves.  And I think we have just about gotten out of the habit of getting Burgers and Beers (at around $70 a pop - wow..    am soo looking forward to getting back to Herbs in Friday Harbor).  Did get coffee now and then, discovered a WONDERFUL cappuccino place, and managed to keep Personal down  somewhat.  (Stopping in that store with $600 purses kind of put an end to Kristi's shipping trip for the day.  Will need to keep that one in mind!).   But overall, September turned out to be OK: 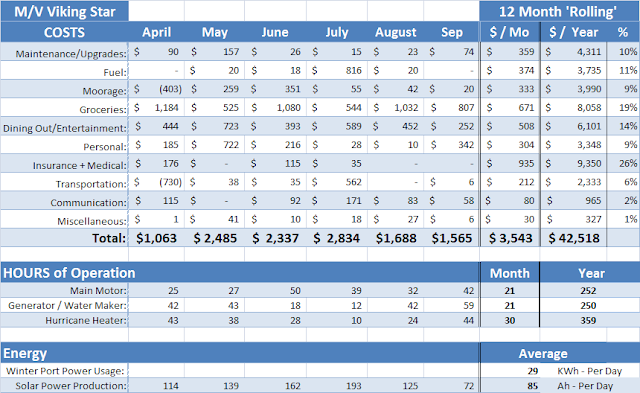 Our IMG international healthcare plan continues to payoff with almost no insurance/medical costs for several months (yearly fee paid in May).  Tomorrow the Obama-care exchanges open in Washington State and we will see how that impacts us.  Looks like we will need to change to one of those policies -- that or leave the country for 11 months out of the year (vs. 6 months under our current IMG policy).   Will see - there is a lot of confusion out there  (err, more correctly named misleading information / aka lies), and until the actual exchange opens will be hard to tell what truth will be.  OK - putting the Box away.

Solar output was down this year vs. last.  (72Ah/day vs. 115Ah/day last year), and below the modeled 99Ah.  Perhaps the biggest 'miss' of the model yet, at least in a month that counts (ala, when we actually depend on the power vs. say December).   Goes to show how Novemberish September has been this year (and yes, that is the talk around these Parts - November arrived early this year).  It also goes some to explaining the 59 hours of run time on the Generator, but not really.  Part of the usage is from us running the Watermaker, perhaps 15-20hrs of the total are directly related to us making water.  And then with this new controller we have been using the generator more - letting it top off the batteries while slowing the engine speed down.  It is our standard practice now to start it up when leaving the boat, knowing it will auto-stop when the batteries are 100% recharged.  vs. last year when we would run it for a couple of hours during the day, then turn it off when the batteries were only 80% charged.   The results is larger number of hours on the generators, but much of it spent at almost idle speeds (and using very very little fuel), and much happier batteries.   But it does LOOK like we have really gone off the deep-end . . . .

Alright, enough for now.  September is done.  October will be our last month 'out in the wild', looking forward to getting back to port for the winter  - already have a list of maintenance tasks to do during the down time.  And looking forward to Burgers and a beer for under $30!