After a few days at the village of Sechelt, we moved on to explore Salmon Inlet.  Most of the way in, there is an anchorage called Misery Bay.  There has been another boat heading in that direction, way ahead of us, and Al worries that they will be anchored right where he wants to go.  Sure enough!  We round the point and there they are.

We set our anchor further in -- the chart shows a dotted line that we guess demarks the area for logging activities.  Then Al takes a closer look at the other boat and says, 'I wonder if that's a Monk.'  They got down their dinghy, loaded their dog, and head straight for us.  And their first question is, 'Is this a Monk?'

An impromptu gathering of Monks!  This is Jim and Alison, and their boat, Lily D in the background.

The next morning they are on their way.  They turn left out of the anchorage, going to the head of the inlet.  We decided the night before that we would pull anchor when they left, and move to their spot.  But, since we are pulling anchor, we will head down to the head of the inlet for a look around too.  Lily D is back before we are done pulling anchor and reports there is some logging activity going on, and it gets quite shallow at the powerhouse.

Just before 7 AM Monday morning, the crew boats begin to arrive in Misery Bay.


Two hours later, we can hear something heavy approaching, and a loaded truck comes to the slide in OUR bay! 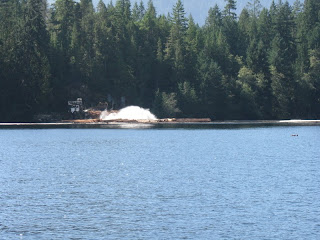 Another follows, and alternate -- white truck, yellow truck -- about every two hours.

Misery Bay is far from city lights, and we love to look at the stars.  They are ALL so bright that it is hard to identify constellations!
Posted by Viking Star at 5:30 PM