Ten years later, like most Americans old enough to remember that day, I remember where I was and what I was doing.  I was at work and did not have access to TV, but did have a radio.  I remember calling my children at home, teenagers and younger getting ready to go to school that day and saying 'America is under attack.  This is an act of war.  Our world is changing!'

We are at Roche Harbor for the next few days, so that Al has a speedy internet connection for the work phone calls he has scheduled.  We found the flag, alone and at half-mast.  The colors ceremony was poignant and abbreviated.

Coincidentally, on our way to Roche Harbor, we noted that our engine hour meter recorded 911 on 9-11!  It was July 2 when we noted 777.  We have counted 134 hours under power in the last 2+ months, an average of about 2 hours per day. 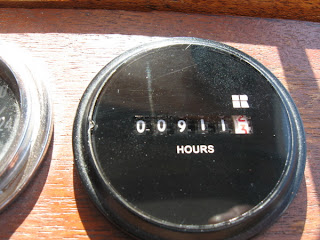