We have decided to stay another night on the buoy here at Obstruction Pass State Park. But this morning we take the dinghy on an excursion to Lieber Haven, where we hear there is a store.

Al is steering and I am a bit uncomfortable with the distance from shore, it seems we are near the center of the pass, when around the corner comes a ferry! Wow. We were under the impression that the ferries take the straighter Peavine Pass. Obstruction Pass has an 'elbow'--hence, Obstruction. We move a bit left and brace for the wake. They are large swells, though, not the big curling wakes some power boats generate.

We arrive to find the grounds of the resort deserted but for a cat. She tolerates a petting, which loosens a good amount of her thick fur. A peek in the store window shows that there is not much there that we need.

Al is admiring the marine railway, upon which the sailboat Lieber Schwan is resting. A small group arrives to rent kayaks and then the store owner arrives, apologizing for the late start.  He has company whom he has not seen in 30 years and they have been catching up. 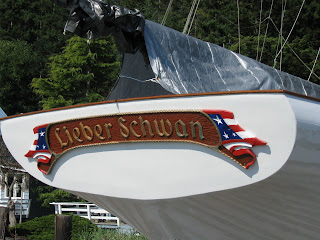 77-year-old David Baxter is an interesting man.  He is the builder of Lieber Schwan and has sailed it around the world with his family.  He purchased Lieber Haven 29 years ago.  He used to live in California, where he built and skippered yachts.  He drops the names of Burt Lancaster, Dick Powell (I admit I will have to look that one up), and Liz Taylor.

Al discusses our boat and finds out Dave KNEW Ed Monk, Sr!  He invites us to anchor in front of the resort anytime, and next spring after they splash the Lieber Schwan again, may make the marine railway available for hauling out Viking Star! As we ready to leave, Al hands him our boat card, and Dave says 'Viking Star?  I think I know that boat.  Was it out of Port Townsend?'  YES!  The former owner was an Alaksan ferry boat captain, lived on it in Juneau during the summers, and wintered at Port Townsend.

After lunch at the boat, we take books to shore to sit in the shade and read.  I also collect rocks to send to a couple of grandsons.  The flat and rounded stones remind me of coins--we would be rich if they were!  And I find a tiny crab, deceased, but complete.  I pose him on a beach log for a photo and the macro makes him look fierce!

It's yellowjacket season!  They are really annoying, but so far we have not been stung.  Al has a theory that the northerly wind on Orcas has driven them all to the south and into our neighborhood.  He is anxious to see if they will be as much of a problem at our next stop.

Tomorrow we will head to Orcas Landing to buy produce.  We expect to find room to tie up on the short dock while shopping since it is now off-season, but we will head to Blind Bay to anchor for the night.  Al will probably throw out a crab pot or two.
Posted by Viking Star at 8:02 PM