It Was A Dark and Stormy Night...

I had woken with the rolls a couple of times already, but this time I could hear the wind howling, and feel the boat shuddering with the gusts.  I was wide awake, I might as well get up, since it is such an effort to actually STAY in bed.  It seemed light enough -- I was hoping it was at least 4:00, but the clock said 2:09.  Sigh.  It's gonna be a really long night.

Al gets up a few minutes later.  We check the wind guage which holds steady at 15-18.  The waves seem to be building, along with the wind.  We are on a mooring buoy not far from shore on Sucia Island.  (We had hoped to be on the dock at Matia, but the dock and both mooring buoys there were taken when we came by yesterday afternoon.)

Viking  Star has a tendency to 'hunt' in the wind when at anchor or on a buoy.  This means that we turn in the wind until the waves push us back, which means we often get sideways to the wave.....NOT comfortable in a boat that we acknowledge tends to roll.

Winds are now gusting to 37.  The waves are 3-4 feet in what we thought would be a rather sheltered location.  It is the side-to-side rocking that throws things around on the boat.  Even though I have by now stowed things as we do when preparing for a passage, the medicine chest comes open and spills it's guts, the kids' pictures jump from the shelf and a few of my books join them.

I am feeling quite anxious and my stomach is rolling with the waves too.  Al wants to talk, and he points out the boats nearby on the linear moorage, but I can't watch them because they are too bouncy, which doesn't help my stomach.  I turn the other way, but my neck is getting stiff from looking that way, and I am sure being tense doesn't help.

We see that a sailboat appears to have moved, and soon that is confirmed as their running lights come on and they begin doing circles.

Al starts the engines, which startles me, but I know he is trying to hold the boat nose into the waves.  We ride this way for maybe 45 minutes to an hour and begin to notice an improvement.  I am exhausted and think I might be able to sleep some more now.  It is after 4:30.  Al needs to read for a bit to wind down, but I don't think I can manage that.  It takes awhile, but I DO fall asleep.

When I awake again, it is 8:16 and the sun is out.  I get up and make coffee and Al joins me.  He makes breakfast and the calmer waves and wind that have allowed us to sleep a bit pick up again, with a vengeance.  Though the waves don't seem quite as bad as they were in the night, we have gusts to 42 now.


We turn on the weather radio.  It is expected to calm to 10-15 later in the day, but tonight there is a gale warning with winds to be 40-50 knots.  Boats have been leaving the bay all day.  We call on the radio for 'any craft in Fossil Bay' and Commotion answers.  When we ask if there is room for us at the dock there, she says a fishing boat just came in and took the last space.  We decide we will move to the linear moorage, closer to shore, and vacated now.


This is a new experience for us, and we discuss what we want to do and how to do it.  We are not certain if there is sufficient room for us between the posts, so I stand on the back of the boat while all steers near and brings the bow to the point he wants, and I say yes, we have room!  Then I move forward and capture a hoop and run a line.  In no time now we have I think 5 lines attaching us.  Though there are small 'cushions' on the line, the rope does rub on the hull, which makes a hum that sounds like a bass fiddle.  Not unpleasant, but we want to prevent chafe on Al's new paint job, so we add fenders. 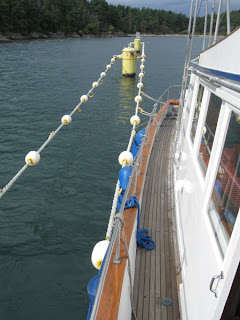 Being on the linear moorage keeps us pointed in one direction.  We will not be turning tonight, and though it does not eliminate sideways rolling, it will be much improved, we hope, over last night.


There were 20 or so boats in Echo Bay last night.  By 3PM this afternoon, all but we and one other are gone. Al say's 'I think we figured out how to get a bay to ourselves.'  I said 'I don't like it.  I'd rather have company' (than suffer the bad weather).

One big disappointment.  We had come to Sucia because we thought cell phone coverage would be adequate for Al's work calls on Monday and Tuesday.  But it was spotty at our location last night, and at our new safer location it is no better.  Sometimes it is better if the phone is on the top deck of the boat.  Conditions may not allow that tomorrow, probably not.  Texting seems to work better than phone calls, so Al has communicated with his boss about the situation.

Presently, we are experiencing the calm before the storm, the next storm.