A Day of Delays

The plan for today was very similar to yesterday's--35 miles and a dam.  But the day broke foggy, misty and cool, making the bed seem extra snuggly this morning.

After Al turned on the radio, and just before we were ready to go, we heard two tugs speaking with John Day dam.  The Willamette was just exiting the locks, another vessel was approaching from below, and the Chief was waiting behind the Willamette.

We saw the Willamette pass and started out.  Al has been verifying ranges on our trip and wanted to go around Miller Island by the south channel to pick up three ranges we missed on the way upriver by taking the more scenic north channel (Hell's Gate).

Then just as we were rounding the bend, we heard the Celilo railroad bridge controller on the radio saying the bridge was preparing to close, did any vessels need passage.  The Willamette called and said he did, and the controller said he would hold the train. We called and said that we were 45 minutes behind the Willamette and we would slow down to allow the train to cross before us.  We knew from radio reports that the Chief was about 45 minutes behind us--a BUSY day on the river!  Especially so, since when we arrived at the bridge, it had not even BEGUN to be lowered.  We ended up losing about an hour. 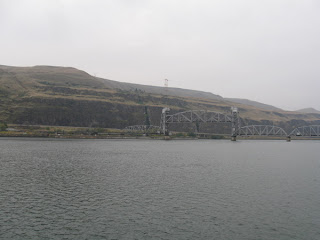 I told Al 'We might get stuck at the dam!  The Chief is going to catch up to us!'  He agreed.  And sure enough, it had taken quite awhile for the Willamette to lock through, and the Chief was rounding the bend.  (Commercial traffic takes precedence over pleasure craft.)  However, the Chief said that as long as we weren't over 110 feet, we could fit along side his starboard side.  Just hold tight while he eased out of the locks because his wash could toss us around a bit.
It took quite awhile for him to work his way in, and we felt like we had 'just enough' room, though the picture shows quite a bit of water between us. 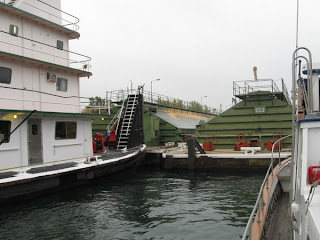 This whole process took well over an hour, when our 6 previous down locks took maybe half an hour each.  We did note that the lock seemed to empty a whole lot slower than the other trips.  Al wonders if the lockmasters take it easy on the tug-and-barges....

The Chief got the green light to leave the lock and sure enough, the wash started a bit of a whirlpool effect, pulling the stern of the boat out (when our lines slipped a bit) and set the bow on the wall.  (More Cetol work for Al.) 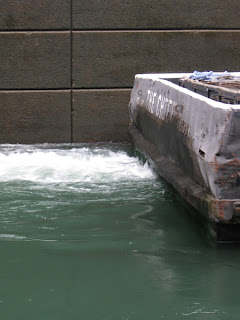 As we were approaching the lock, we had heard the Kathryn B call the dam looking for a lock up.  She was waiting as we followed the Chief around, oh wait, she's moving up already!  Guess we'll pass her port-to-port as we round the green can! (Quickly confirmed on the VHF radio) 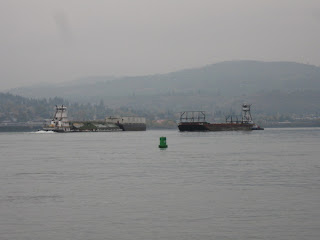 It is nearly 4:00, and we still have 20 miles to reach Hood River.  We should make it fine, but darkness may be falling as we arrive.  We plan to layover here tomorrow, as the weather report says winds will gust to 22 mph.
It's more than mist now.  And one wiper needs it's blade replaced.  Luckily, the one at the helm is good.


We made it!  See that little pink circle?  That's us.  And the line away from it shows the orientation of the  boat. 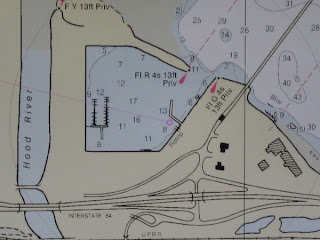