Early to Bed, Early to Rise

Yesterday was a long day.  We were up late the night before and had set the alarm for a half hour later than the time we had usually been waking up.  We were dreaming away when the alarm went off.  So we were looking forward to sleeping in this morning.  But.....

Early to bed, early to rise....I guess we are both quite healthy, we are doing pretty good financially, and the Christmas Shippers DO call us 'The Wise Guys'!

So this morning we called Larry at the marina to let him know we wanted to take on some fuel.  We took 100 gallons at $2.87.  Al checked the log, and on this trip we have motored 95 hours.  So we have used roughly a gallon per engine hour.  For years Al has been telling people that we burn a gallon and a half an hour--but hey!  We do better than that! 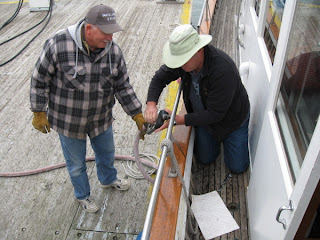 We thought when we left this morning that we would be stopping at Boardman, or possibly 5 more miles further at Crow Butte.  But as we approached Boardman, it was only 12:15, and it seemed a shame to end the day so soon.  So we calculated, and determined that we could reach Arlington around 4 or 5PM.  It was raining most of the day, but the winds were light and from the north, no problem at all.
So checking the charts......ugh.  Looks like another long day tomorrow.  Forty miles AND a dam to Miller Island.  Better set the alarm again.
Posted by Viking Star at 5:45 PM