After a shower ashore so hot and steamy it made me light-headed and worry about passing out, and after Al finished his staff call, and after we pumped out on the way out of the marina, we were underway and soon rounded Sakajawea State Park and entered the Snake River. 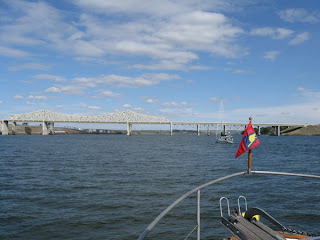 We marked three more ranges, and then approached the Ice Harbor dam.  This is another of the three tallest single-lift locks, and has a guillotine gate.  Al called this one the 'E-ticket ride'.  Somehow we got too much slack and the stern swung away, and the bow went scraping up the wall.  Al says he will be opening up a can of Cetol tomorrow morning.
We SCREAMED up that lock!  It was only 20 minutes from gate drop until we were all clear of the lock.  Maybe a bit TOO fast, considering.
An hour later I told Al 'I am tired.  After that shot of adrenaline, I am ready to crash now.'
Just a mile up from the dam is the Ice Harbor Marina.  Brigadoon went in and determined that there wasn't any space available, and that the harbor was too small for us to anchor out.  We moved upstream another 5 miles to a cove called Toilet Bay locally.  It is unnamed on the chart, and Marti says it looks like a uterus.  It's rather small, so Brigadoon went in first and set their anchor.  Then Maxine rafted off. 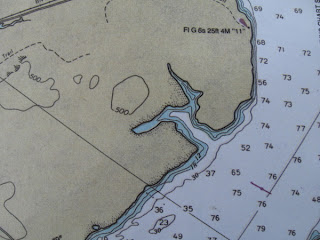 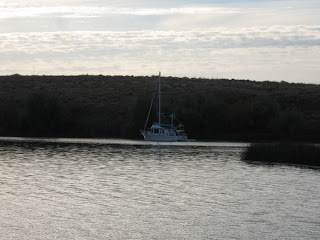 We TRIED to anchor.  After six attempts with Al's big, heavy spade, he changed out the anchors to our standby Danforth and made three more attempts.  The anchors and chain were filthy with smelly soft black mud the consistency of yogurt.  Thinking that we had done enough tilling for the night, we gave up and headed back down river.  Here is the pretty sunset we were treated to on the way. 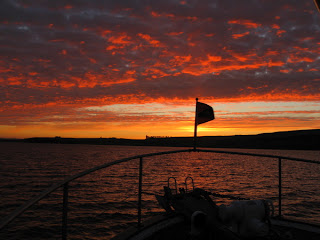 On the way upriver, we had spotted what looked like a floating dock in a little cove in an area called Levey.  It is important to be on the east side of a curve of the river, since 20 mph westerly winds are expected overnight.  The dock here is covered in goose poop and is not very stable.  There is also a sign at the top that says 'No Mooring Allowed 10PM to 8AM.  But we are going to be rule-breakers tonight.  It is Park that is presently in caretaker mode for the winter..

Al is up exploring the land, to see if he can find a spot where his cell phone works.  He has a work call at 1 PM tomorrow.  We had planned to borrow a phone on Brigadoon, but we left them behind in Toilet Bay.  Oh, he has returned, and had success!  Maybe tomorrow morning I will walk with him to the top of the hill and post this!
Posted by Viking Star at 11:14 AM