Dinner last night was fabulous, with all bringing a contribution.  A game of Mexican Train (a domino game) followed.  We skipped the port.  Marti gave us sourdough start awhile ago and Al wanted to try pancakes, so the crew was all invited back for breakfast.  Again, a yummy meal in good company.

The wind picked up quite a bit overnight and several in the party did not sleep well.  It was howling in the rigging of Brigadoon and Maxine got bounced around a bit.  Both were closer to the mouth of the bay than Viking Star--I guess they blocked it for us.  We HEARD it, but it didn't disburb us overly much.

The diving bird I had watched and tried to photograph yesterday popped up nearer the boat.  Rob says he is a grebe.  I guess overnight he decided we weren't a threat, and didn't startle when I stepped outside the cabin to snap a few photos this morning. 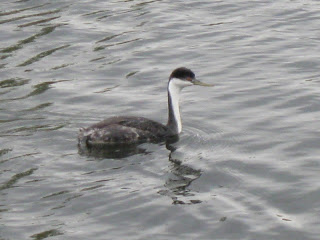 Also, we saw a coyote at the top of the ramp last night, and could hear more howling across the river.  Al tried some photos, but they basically just show black, with two little white dots where his eyes reflected.
It's an easy day on schedule today---just 20 miles to go, and NO DAM!!!
Last night the Safari Explorer sped past the bay at Central Ferry, and this morning we met Island Spirit coming down. That is one of the boats we saw in Hood River. 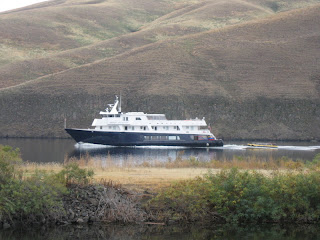