The last up-lift is now behind us!  The sun was reflecting at just the right angle on the water to make an approaching photograph pretty unsuccessful.  Lower Granite is unusual in that the lock is in the middle of the dam. 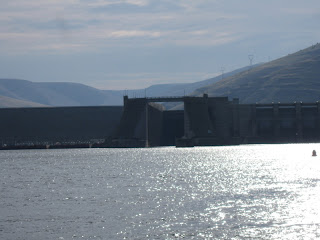 Overnight the wind turned and for the first time, we are heading into it.  Luckily, the river twists and turns a lot so the fetch is not too great (for non-boaters, that is the distance the wind has to push the waves).
The charts show that we are heading into some of the steepest river walls we have seen since the Columbia Gorge.  The river will narrow quite a bit, but still be very deep until we approach Clarkston/Lewiston.
Castle Rock: 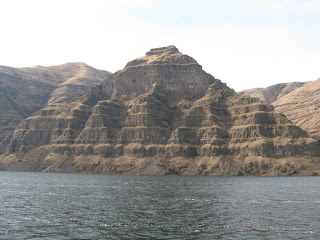 As lunchtime approaches, the clouds are clearing away, and the wind waves are smaller.
Hey, we have arrived and got all checked in and hooked up!  Viking Star will be staying here 4 nights, the other two boats will be leaving on Monday morning.  We did not have cell phone service restored until nearly to town.  Al had hoped to make it a bit further downriver before that, but he NEEDS a phone on Monday and Tuesday, so we will stay until then.
Posted by Viking Star at 4:14 PM